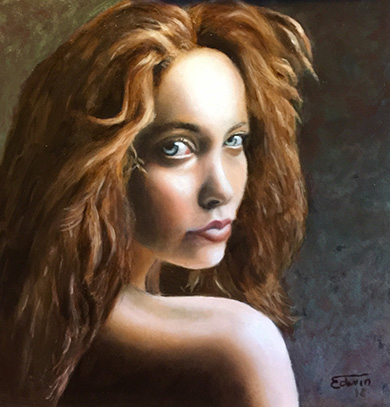 Edwin decided to make a trony based on the techniques of the great masters after the Mauritshuis Museum in The Hague revealed that Vermeer’s masterwork and world-famous painting “The Girl with the Pearl Earring” was subjected to a rigorous study investigation. He was interested if the research findings would be consistent with the technique he had learnt from 15th-17th century tracts. And there is great news, which he will share on this blog in the coming weeks.

What exactly is a trony? A trony, by definition, is a portrait study of an anonymous model. The term trony origins from Dutch and meaning “head” or “face”. It stems from Middle Dutch words, “troonie” or “trongie”, and is derived from the French “tronge”. Why would a contemporary artist want to create a trony? In addition to the reasons stated above, he wanted to make an effort to try to feel what an old master had to endure and what creative problems he had to solve for making a trony, and (ii) he wanted to test his skills and craftsmanship against the findings of the research team that investigated Vermeer’s Girl with the Pearl Earring.