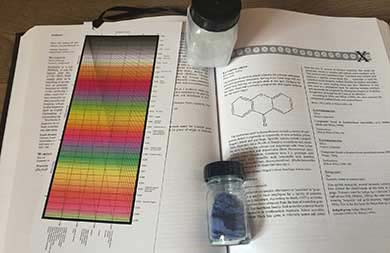 Tonality
Tonality, often known as “plasticity” in artistic jargon, is another critical component that must be addressed. This is the application of highlights, midtones, and shadows to establish the form – and hence the resemblance to the model. Both pieces are done in chiaroscuro, which means there is a lot of contrast between dark and light. The benefit is that you can make a variety of shapes; the negative is that you sacrifice color. To compensate, Vermeer wore a lapis lazuli head scarf, while Edwin highlighted the model’s red hair, which contrasted wonderfully with the model’s emerald eyes.

The materials used in the tronies
Vermeer utilized linen canvas as a support, whereas Edwin used a multi-layered hardwood panel. He also used ancient colours, like as lead white and vermilion, as the old masters did, according to the tracts. Edwin is permitted to acquire and use these pigments for producing paint since he is a professional chemist. Without a chemical diploma, it is strongly recommended not to operate with these dangerous colors.

The support
The wooden support for Edwin’s Trony was chosen with great care. He selected a panel over a stretched canvas. The benefit of multi-layered wood is that the panel can be kept thinner. Because the layers are attached perpendicular to one other and the veins are therefore perpendicular to each other, multi-laminated wood bends more slowly. Vermeer’s paintings are on linen. Edwin glued linen on the multi-layered wood with a special adhesive; this is called marouflage and is used to absorb the leftover working of the wood. The adhesive reduces the working of the linen and protects it from the oxidizing oil layers that cause the linen to oxidize.

The grounding
A priming layer is put over the linen’s glue layer. According to Vandivere’s blog, the old masters used lead white, omber, and maybe a bit of charcoal. She also claims that her research team discovered enormous amounts of chalk. As an explanation, she suggests that this may have been a filler. This might be a plausible explanation, but it’s also possible that Vermeer’s canvas was primed with a (thin) conventional gesso, which Edwin believes matches better with the scientific findings: lead white, chalk, and other earth pigments.

It would have been intriguing for the researchers to discover more about the binder employed in this pigment layer: if it is oil, it is unquestionably paint, and if it is glue, it must be gesso. Edwin’s panel is prepared with conventional gesso since he works on a veiled panel.

Because linseed, from which the oil is produced, is harvested before rapeseed (in mid-July vs the end of August), contamination is unlikely. Vermeer may have purposefully chosen rapeseed oil, particularly in the highlight regions, because its chemical nature makes it less susceptible to yellowing than linseed oil. As a result, bright regions are less susceptible to yellowing. Rapeseed oil is chemically similar to safflower oil, which is currently commonly used in light colors for the same reason.