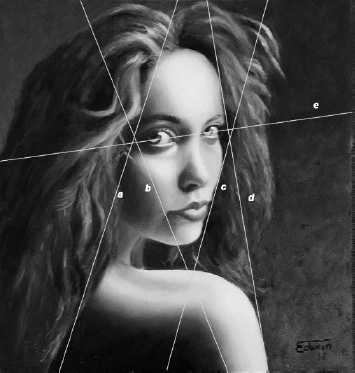 The Subject
The girl with the Pearl Earring depicts a young girl flirting with the audience by gazing partially over her shoulder. She was plainly staring at the artist as he was painting her. Her lips are somewhat moist, and her eyes are wide open. This is without a doubt one of the most intriguing mysteries surrounding Vermeer’s paintings. Everyone is curious about this girl’s origins and her relationship with him. The girl in Edwin’s tronie, titled “The Girl with the Mysterious Eyes,” is staring over her nude shoulder towards the audience.

Artistic choices are compared.
When compared to Vermeer’s masterpiece, the girl in Edwin’s trony is a mirror image. This is a type of symbolism for him. He “mirrors” his method after the old master’s. Following that, Edwin displays a more zoomed-in composition of the girl. This is an aesthetic decision; he wishes to retain the composition and tone as near to his own present style as possible. Modern innovations, such as photography and filmmaking, have definitely affected this. Edwin’s tronie, on the other hand, is created totally in the style of the old masters.

The surface division is substantially varied as a result of all these creative decisions. The tronie, The Girl with the Mysterious Eyes, occupies a broader plane than Vermeer’s picture of the Girl with the Pearl. Edwin attributes it on fashion. It was more fashionable in the 17th century to depict the girl’s context, however in the 21st century, due to the impact of photography, there is a greater emphasis on the girl’s face. The timeless principles of geometry, however, are obviously present in both pieces, as seen by significant diagonals in both paintings.